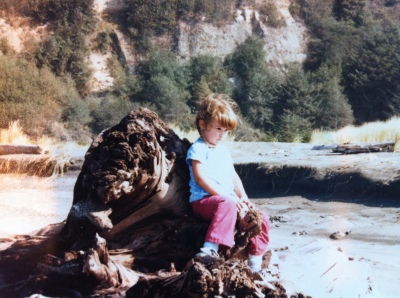 I sure wish I could have brought my underoos.

When I was a little kid I thought that a normal family outing might include going to watch bears dig through the trash at the town dump.

And, I thought the whole world was the forest. Well except for Grandma and Grandpa’s, they lived in the fairy garden that my Uncle David planted. And except for Grandad’s, he lived at the beach. But other than that, world = forest.

Until I was 5, I grew up in Northern California, in the tiniest of tiny towns called Orleans. My Dad worked for the Forest Service and the Forest Service compound was practically the only thing in town. There was a grocery store which was run by the family of the little boy that I had sworn to marry. He played the violin and he had a Great Dane named Hindenburg who was so tall that he would lay his head on the hood of our brown VW Dasher when we came to town to get groceries.

When I was five my family moved to another forest in the Black Hills of SD. And I loved growing up there. But, in some ways, the memories of the years in California sometimes feel more vivid and super-sized. Maybe because the world was bigger because I was smaller. California was where I played in my Wonder Woman Underoos in the yard and kissed neighbor boys behind bushes and rode on the handlebars of my sister’s bike and also where we backpacked and camped on beaches and played in rivers and watched our dog chase salesmen onto their cars.

I learned that pumping your arm up and down would get the semi’s that drove by the main road to honk their horns. I learned that my sister (who is 7 years older than me) could charm snakes and climb trees and she was just about the coolest thing on the planet.

I have been trying to remember these times lately to remind myself of how fun simple is. I do this as I sit at home with my two-year-old and feel guilty because we don’t go to museums very much and we play at home a lot and we go for hikes, but is she bored? Should we be doing more? It feels like everyone around me is doing more. And then my son gets home from school and I often kick them outside to play but should we all go do something?

And if I think about it, we didn’t ever do a ton of things growing up. At least not until school and organized sports started. There wasn’t gymnastics class and music class or swimming pools or library story hour. We played outside. And because it was so rainy in Orleans, we played inside. We didn’t have a lot of stuff. I can remember the two stuffed dogs, Woofy and Cuddles, that I loved the most. I had to play with them equally because I felt like they might get jealous otherwise.

So, when I think of how glad I am that I have landed in a place on this earth that feels the most like home, I also think of how happy I was growing up. And that the simple stuff really was enough.

I want my kids to look back on their childhood and remember trees. And dirt. And that favorite stuffed animal or that favorite doll. A little freedom. The snow. Occasionally some homemade cookies. I want them to remember good food and riding their bikes on things that they shouldn’t.

And bears. Yes, I even want them to have their memories of the bears.

This post was brought to you by Finish the Sentence Friday (FTSF). The Sentence was “When I was a little kid I thought…” Please visit FTSF blog hop hosts:

Stephanie at Mommy for Real

Janine from Janine’s Confessions of Mommyholic

Kate at Can I Get Another Bottle of Whine

11 thoughts on “Memories of Bears”